It started with what I call ‘The summer kitty catching campaign of 2008’. My neighbor to the south said he had some kittens running around his yard and asked if I wanted them. I told him that I had plenty of cats and didn’t need anymore. I didn’t sleep well that night thinking about those kittens, so the next day I told him that I would take the kittens but I wanted to catch all his cats and get them fixed. During the summer, I caught the three kittens, the kitten’s mother, the kitten’s uncle and the kitten’s grandma. They were all semi-wild outside cats and all had to be trapped except the mother. The grandma of the bunch was Tigle.

This is Tigle a few months before I trapped her. 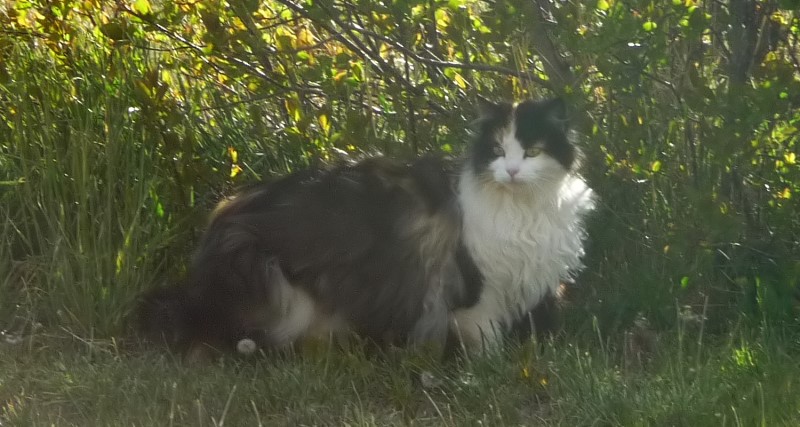 And this is her just days before I caught her. 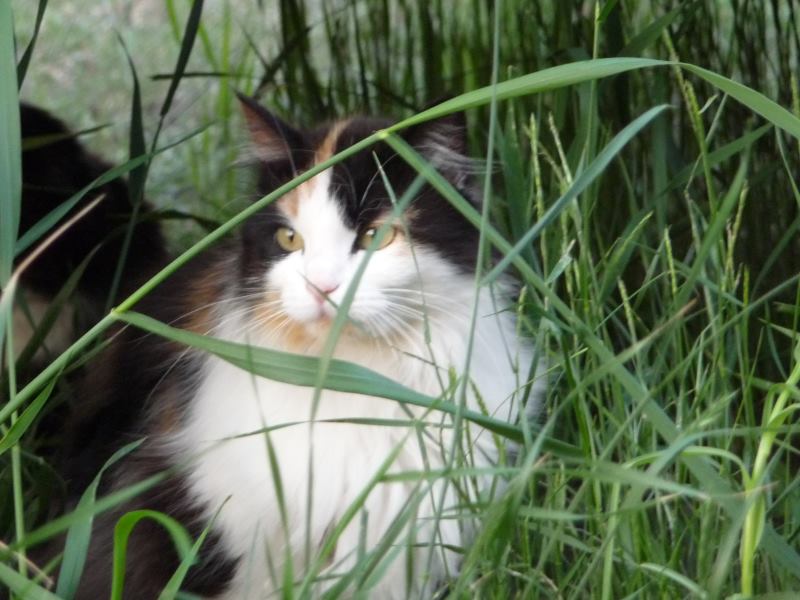 When I trapped her, she was terrified and went completely nuts in the trap. It was going to be a couple of days before I could get her to the vet to get spayed so I turned her loose in a room in my basement. She tried everything to get out of that room and I had a heck of a time getting her into a carrier for the trip to the vet. I brought her home after she had been spayed and had received all her shots and after a few days I turned her loose outside. She wanted nothing to do with me after that.

I had named the mother cat Little Sweety and the uncle cat Bandy. I had also let those two loose after their trips to the vet’s office. They were becoming friendly and were eating and sleeping in my barn where I had some heated cat houses. After a while, Tigle also decided that my place was a pretty good place to hang around. So, in the end, all the neighbor’s cats ended up at my place. For the next six years Tigle lived outside at my place but never let me closer than ten feet.

These are pictures of Tigle in the following years. 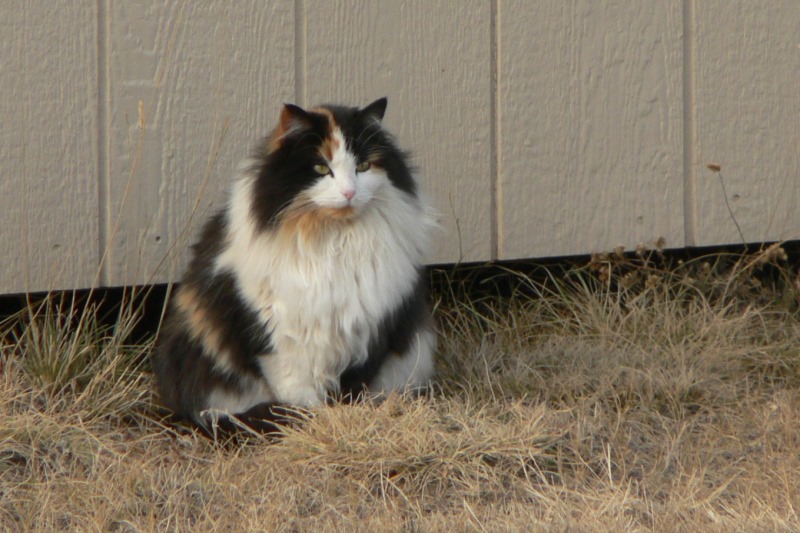 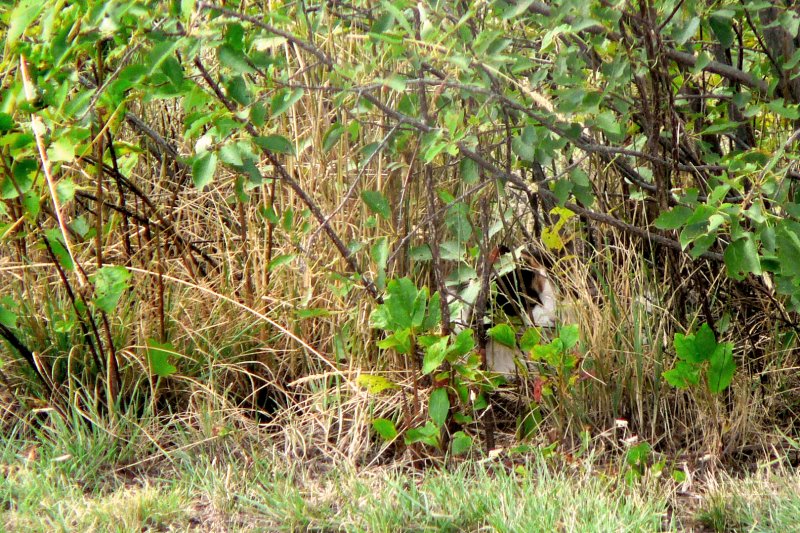 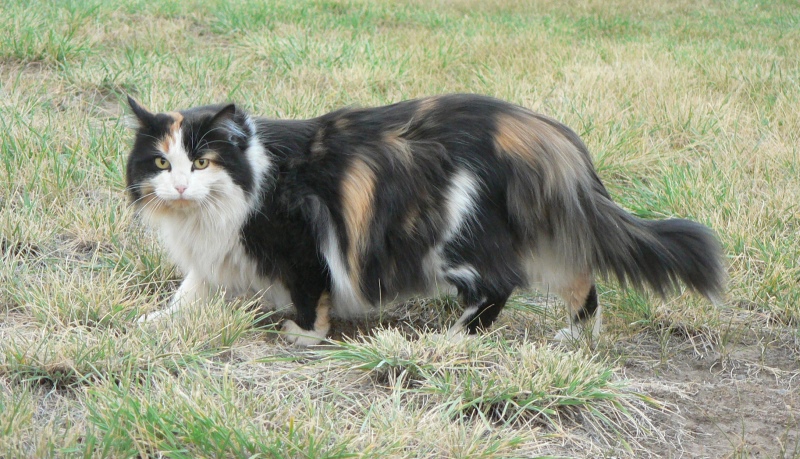 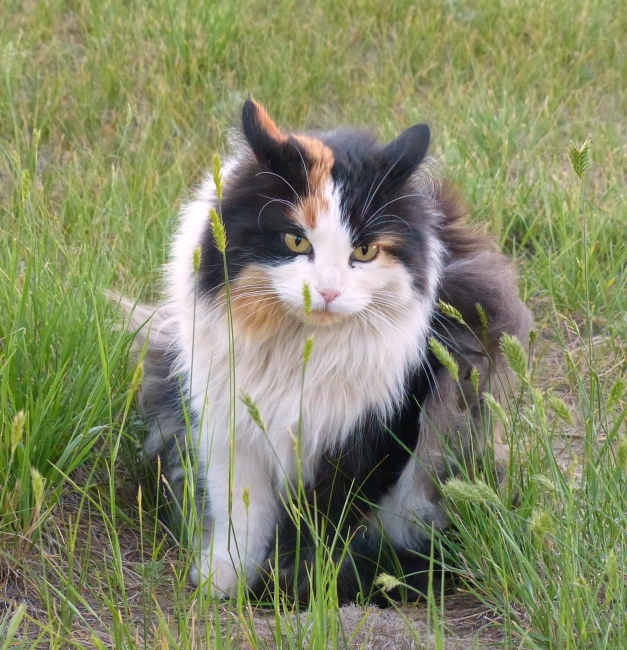 Then, about three years ago, while I was outside enjoying the summer weather with all my kitties hanging around doing their thing, I decided to give each of them some catnip. Tigle had never had catnip before and she absolutely loved it. She got so that she would even come up to the house and yell at me until I’d bring her some.

Here she is snacking down on some catnip. Little Sweety, in the background, already had hers and now seems to be having trouble feeling her tongue. 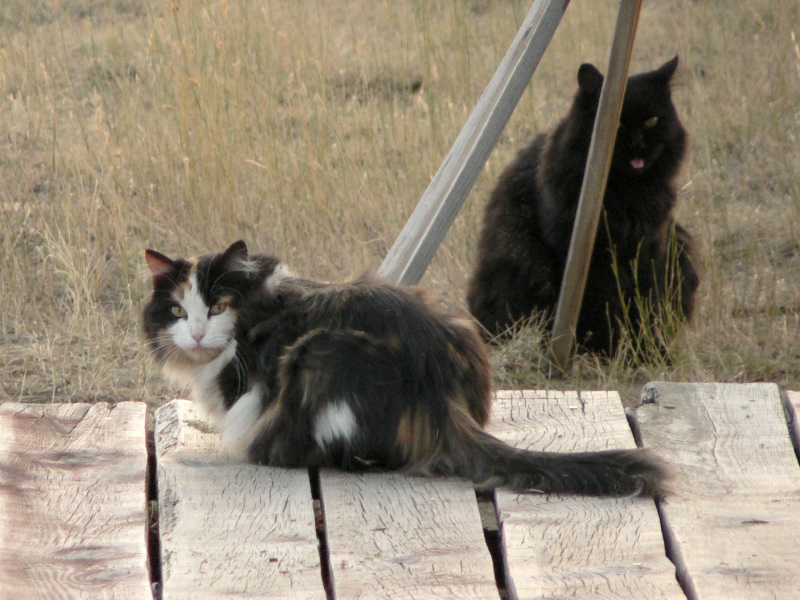 Tigle began to trust me more and would let me get as close as a foot or two. She seem to be getting even friendlier last winter when she let me pull some fur mats off her neck.

Then last spring, I noticed that she was having trouble urinating and showing all the signs of having urinary tract infection. I knew I had to get her to the vet, but trapping her again was going to be tough. After careful planning and staging the cat carrier close at hand, that next evening I grabbed her and put her in the carrier. When I grabbed her, she didn’t put up any fight at all and she was light as a feather. Because she had such thick long hair, I hadn’t realized how skinny she had gotten. Something was seriously wrong. I took her to the vet the next day and the vet knew right away what the problem was. They ran tests and verified that yes, she had a UTI, but her main problem was that she was diabetic.

She had been so sick that she hadn’t been grooming herself very well, so she was covered with matted fur. The vet shaved her from her shoulders to about midway to get the worst of the mats off. She was a sad looking kitty. The unusual thing was that this kitty, who hadn’t let me touch her for the first seven years, snuggled right up on my lap while we were at the vets. She was going to need an injection of insulin two times a day from now on, so I knew I would have to keep her inside. That was last May and she’s taken over the basement and has been inside ever since. She also insists on a good snuggle, two or three times a day. Over the summer I managed to get the rest of her mats off which left her bald from her shoulders to her hips. In the months since, her fur has grown back and she now has a beautiful coat.

This is what she looked like just a few weeks ago. 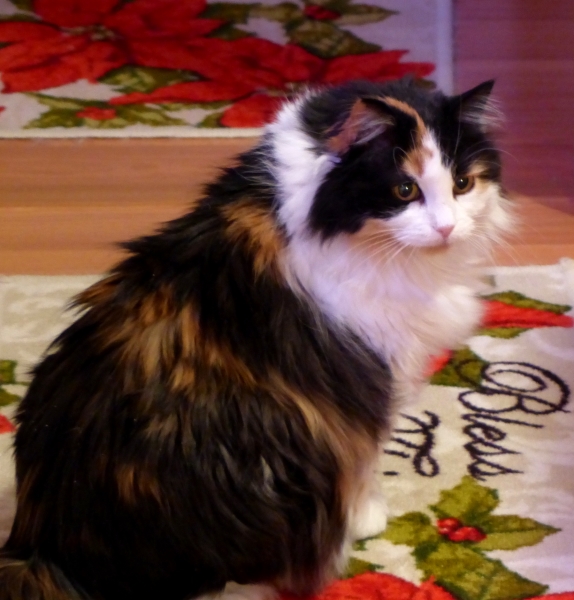 The last time I took her to the vet to check her glucose levels, it showed that we could cut back on her insulin and over time might not have to give her injections at all. That would be great but I’m going to keep my little girl inside anyway. I would miss those snuggles.