1. Insulated Pet Carrier
March 2014
I had to take my cat Pookie to the vet this morning. It had been blowing and snowing all night with lots of drifting. If I didn’t have a 4×4 I never would have gotten out to the highway. The temperature was down to -6F with a windchill of -15F. I hate taking the babies to the vet in weather like this, but it had to be done. Besides going from the house to the truck and the truck into the vet’s office, I always worry about what I would do with the kitty if I broke down or got stuck.

Here’s how  Pookie went to the vet… 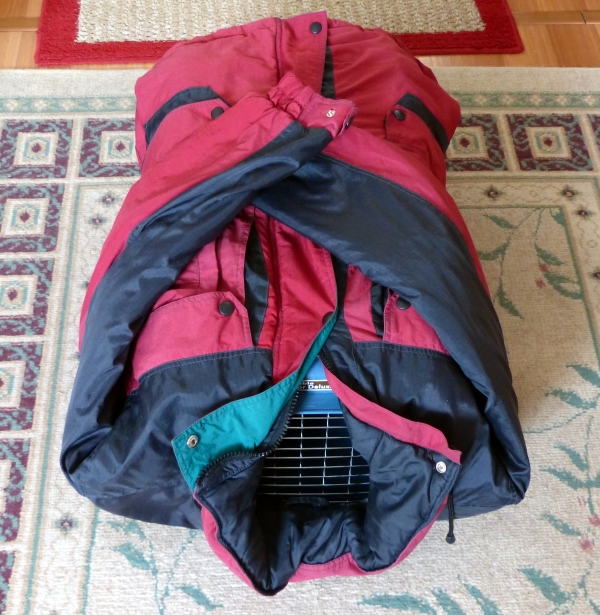 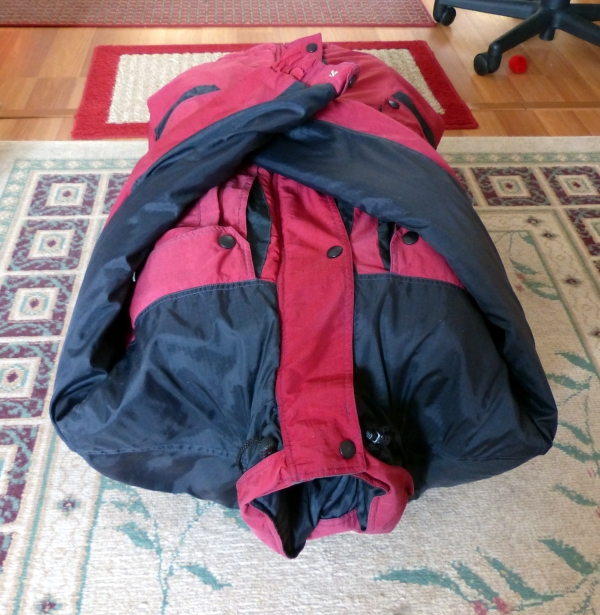 Because the coat didn’t cover the back of the carrier, I put a fluffy towel inside the carrier at the back for insulation.

2. Feather Duster as Play Toy
February 2010
A few months ago, while I was at the Dollar Store, I bought a colorful feather duster for the cats to play with. Pretty Girl absolutely loved it. Here she is after one of her play sessions. (Sorry it’s not the best quality) 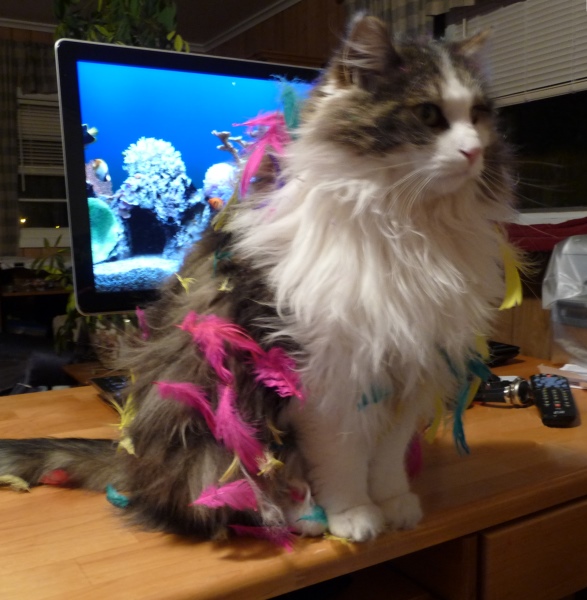 Needless to say, after a week or two, there wasn’t much left of the feather duster. When I went to pick up another one, they were all out and weren’t planning on reordering any more. I finally found some on Ebay. The only problem was, the smallest quantity I could buy was 2 cases at 24 per case. Oh well, whatever keeps the babies happy. Here’s some pictures of Pretty Girl, Redhead and Swoozie with the new feather dusters. 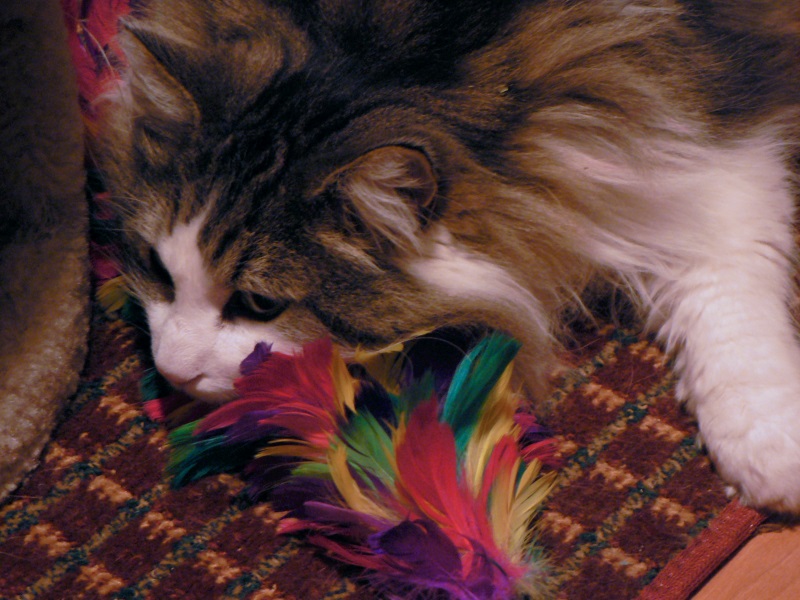 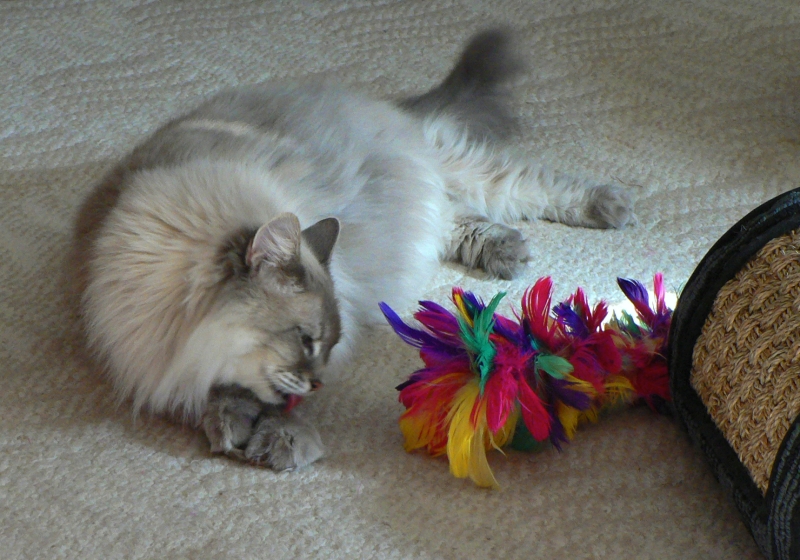 3. Using a Black-light with My Cats
September 2011
Would you believe, I’m still cleaning from when I was on my cruise. The house never did get back to a completely non stinky state, so I got out the black-light and went searching for the hard to find stinky spots. The black-light makes any spot where a cat has peed glow a bright bluish white. I only found a few dozen spots, all with Chewy’s signature spray pattern. He has been banned from the house for years because of his bad behavior but with the new cat doors open, he’s been free to come inside. I thought he’d changed his ways, but obviously not. Surprisingly, females cats will spray as well as the males.The black light works great. It’s makes finding the messes easy and it will show food stains too.
The second use for the black-light is to check for ring worm.
When the vet thought that Bright Eyes might have ring worm, I checked her with the black-light. The fungal infection should have fluoresced if it was present. I didn’t see any sign of it and sure enough the vet’s test turned out negative.
Recently a vet told me that only half of the varieties of ring worm will fluoresce under black-light.
The black light that I use is one I bought at Walmart for $10. It has an 18in. fluorescent tube in an ‘under the counter’ type mount. I plug it into a long extension cord and walk around holding it about a foot from what I’m checking. I checked out the type of black lights that they use for forensics but they were hundreds of dollars, so that was a no go.
I’ve since bought little blacklight flashlights from Amazon which work great when wearing yellow tinted glasses, also found on Amazon.

4. Twirly Laser Toy
January 2014
I bought the kitties a new toy a couple of days ago. It spins around at different rates and patterns, moving a laser dot around for the cats to chase. Cubby didn’t quite get the idea. Notice that he’s always looking exactly in the wrong direction from where the laser dot is.

Ok, update on the new laser cat toy. It works well until the batteries start to get worn. The toy still spins around fine but the laser loses brightness and gets hard to see, even for the cats. I substituted rechargeable batteries so I could keep fresh ones in the toy, but that didn’t work very well because the rechargeable batteries are only 1.2 volts per cell where regular batteries are 1.5 volts, so even at full charge I was starting with a lower voltage. Again the toy spun around fine but the laser was way too dim. My solution was to use the rechargeable batteries to spin the toy and to mount a separate laser pointer with a nice bright laser. The new laser is set at the same angle as the original was and it doesn’t shine into the kitty’s eyes, which I had worried about. I can set the angle to whatever I want. I can buy the add on lasers at Walmart for $2 each, complete with a spare set of batteries. You can by replacement batteries for the laser online really cheaply. So now the babies are happy with their new toy.

Here’s a couple of pictures of the add on laser. 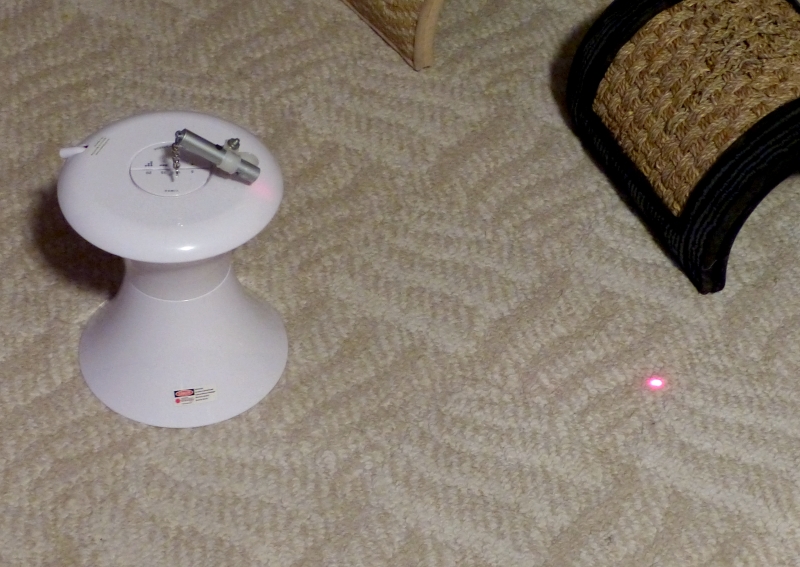 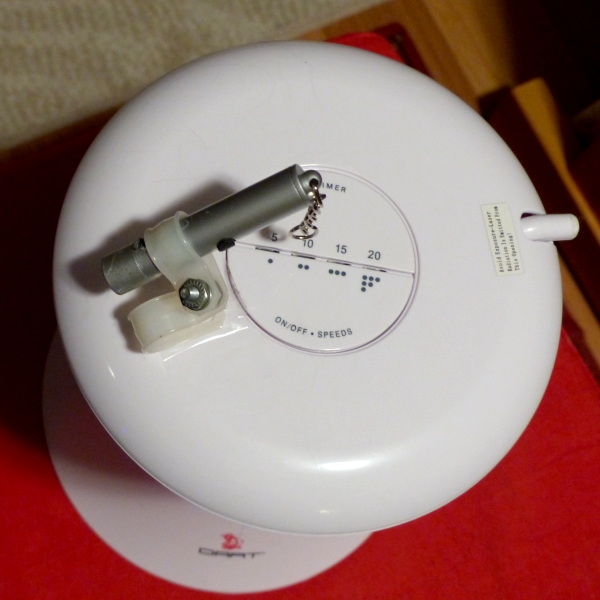 To turn the laser on, I just twist it in the bracket which depresses the ON button.
A lot of these small laser pointers have a brass fitting on the front that was used at the factory to focus the laser. If you turn this fitting you can make the laser dot much bigger and easier for the cats to see.

5. Rolled Towel Bed
February 2014
This is Bright Eyes in one of her favorite beds, which is just a rolled up towel with the ends clipped together and a hand towel covering the bottom and the clip. 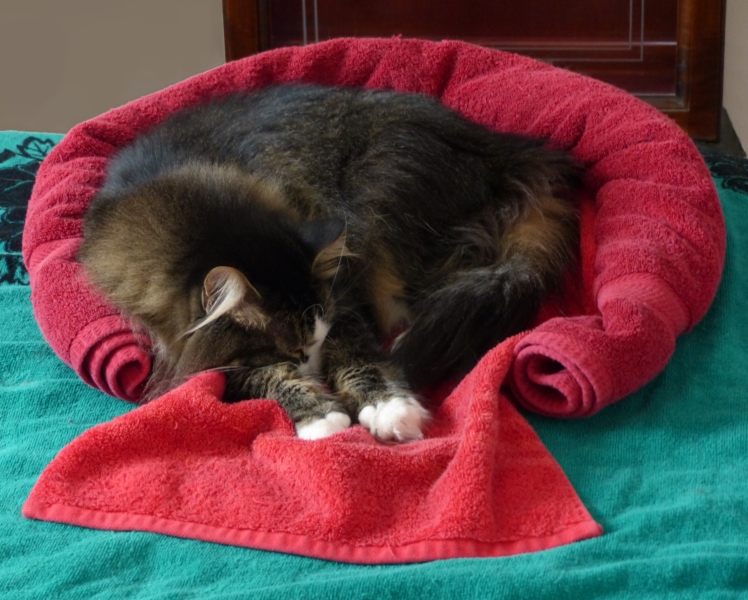 My latest way to make these beds is to roll up the towel with a long shoelace running through it. I tie the lace ends together to hold the shape, then I lay towel over the whole thing. Three years later and the babies still sleep in these beds every day.

6. Puppy Pads for Marking Cats
I use some on the floor in front of the catboxes to catch the litter when the cats jump out, but mostly I put them where one or more of the cats decided to mark the walls or cabinets. I fold them up at the bottom so nothing reaches the floor.

Here’s an example of how I put them up. 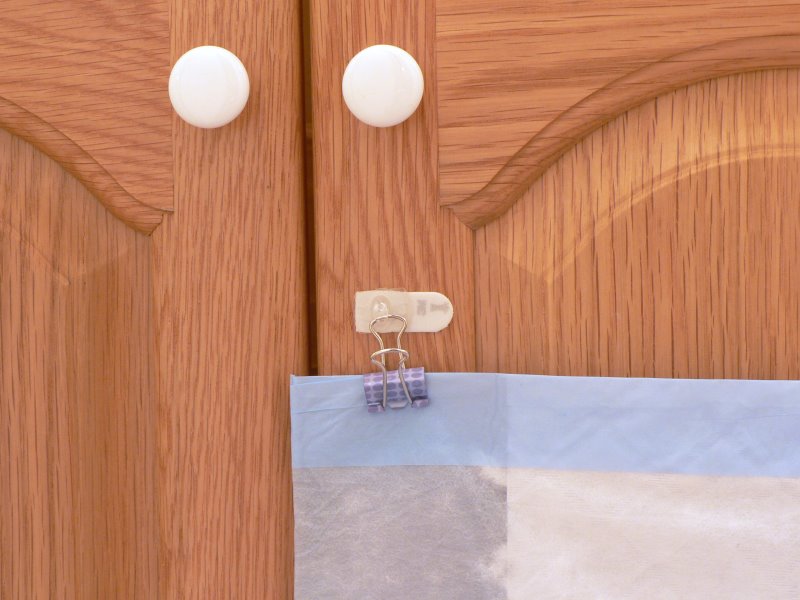 I also put puppy pads in bottom of my pet carriers, just in case one of the kitties has an accident on the way to the vet.

7. Replacing cardboard boxes
One thing that is univerally true is that cats love cardboard boxes. My cats love it when I get a new shipment from Amazon because that means they get a new box to sleep or play in. This is great except I get tired of always having those boxes laying around the living room. It finally dawned on me that I could replace the cardboard boxes with something a little better looking.
Here’s Spit Kitty in one… 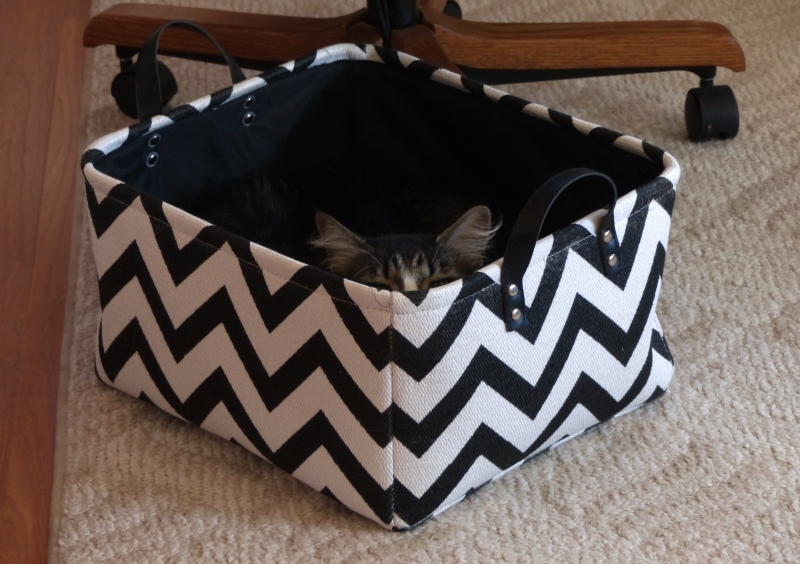 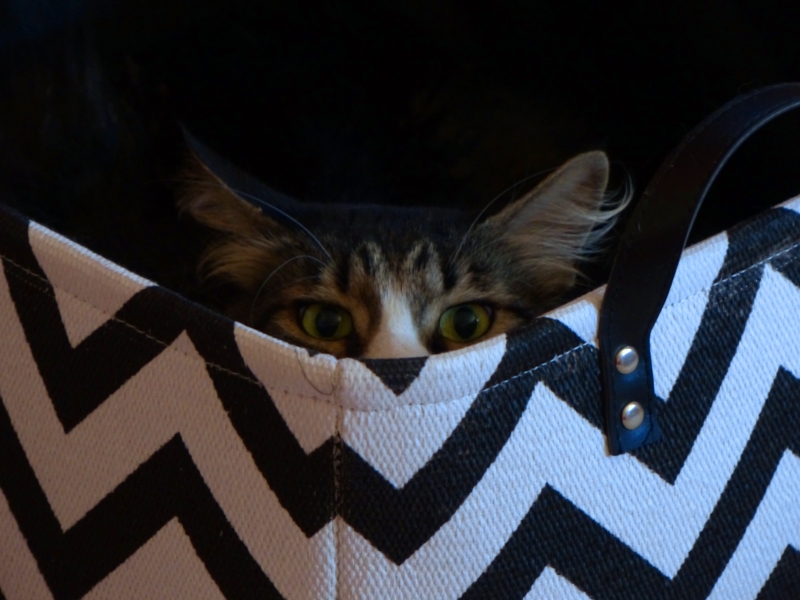 And this shows both Huggy Bear and Spit Kitty sleeping in a second one, at different times of course. 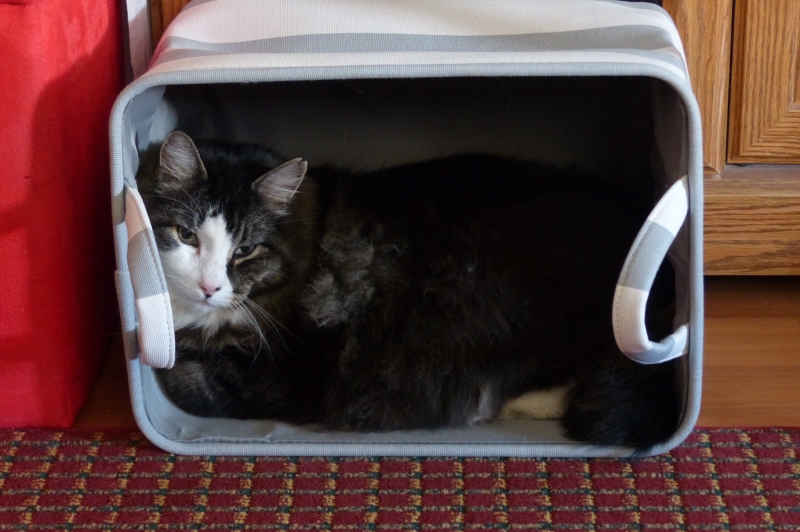 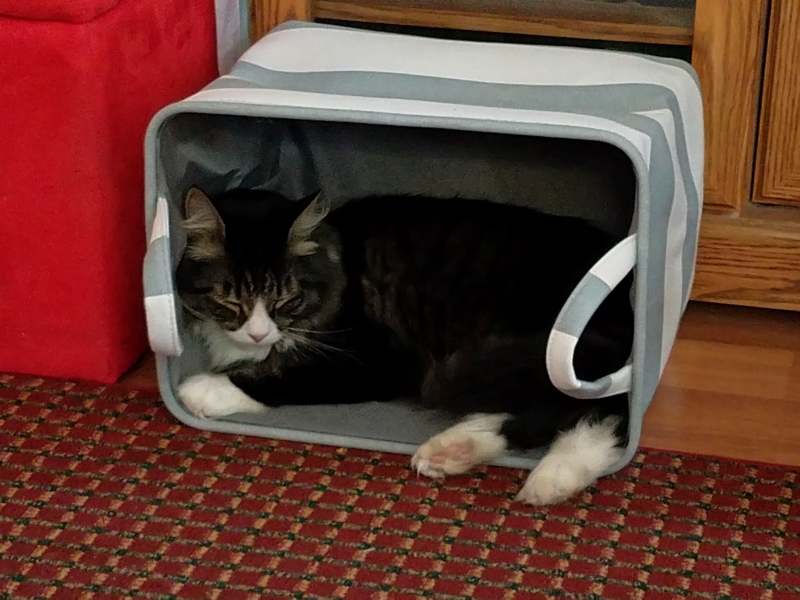 Even Screamer liked the one I put out in the cat room on the big deck. 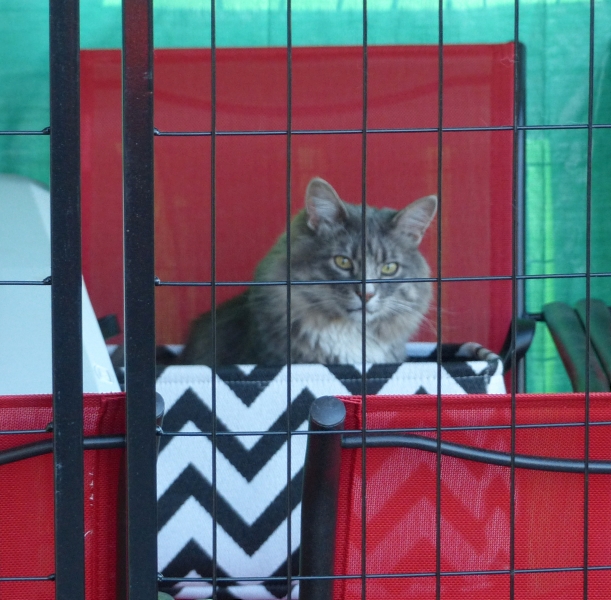 8. Cat Sleeping Bag
December 2009
When I went out to the barn a couple of nights ago, as I was putting out the food, I could see a cat peeking out of the little sleeping bag that I made. It was Petunia, the cat formerly know as Jet, who is the latest stray around here. It’s nice to know that it’s being used. I did have to anchor the bag so it wouldn’t fall off the top of the cat house.

The sleeping bag is really a simple idea. I had an old mattress pad that I was going to throw out. When I had it sitting on the back porch before taking it to the dump, every time I went out, there was a cat snuggled up in the folds. I decided if they liked it that much, they could have it. So I guess the cats came up with the idea.
I clamped the back end closed with big clips and stuck it in an old pillow case.
I put it out in the barn on top of one of the cat houses. A couple of times in the next week I found it on the floor, so I put a couple of loops of cord around it and tied the loops to eye screws in the wall. 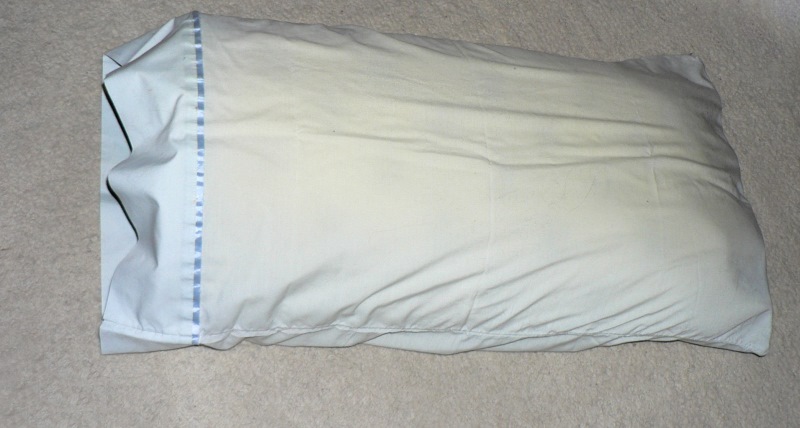 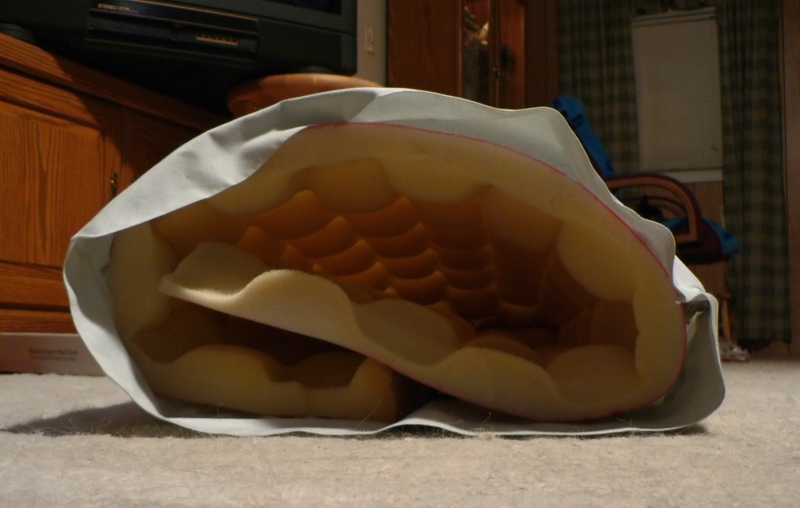