12 18 2015
A new kitty showed up last night. A big fluffy grey tabby. He’s a little skittish but clearly used to being around people. He enjoyed eating but didn’t act like he was starving. I’m not sure but from his face I’m don’t think he’s an intact tomcat. I saw him later, eating out at the barn too. We’ll see how it pans out.

12 20 2015
The new gray tabby, who has been showing up in the evenings, doesn’t seem to be all that interested in food, but does seem to want to come inside. Normally I’d let him in but since I added Huggy Bear and Puzzles to my tribe, things are in a delicate balance. Everyone at least tolerates each other so I hate to take a chance on upsetting that balance. Mr. Gray has touched noses with a couple of the cats so maybe there’s nothing to worry about.

12 21 2015
Here’s a low light picture of the gray kitty from earlier tonight.
Yes I did let him inside for a while. 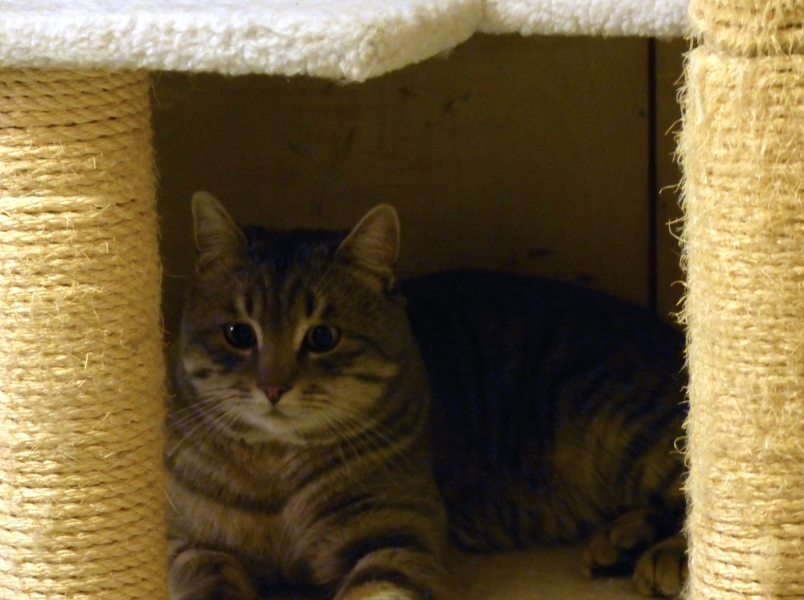 01 01 2016
The new gray kitty has been coming by every night and spending 2 to 3 hours inside, exploring, napping, and a little eating. Upon closer examination it turns out that he’s an intact male. I would never have guessed that as he’s never shown the slightest aggression and is always trying to be friendly with the other cats.

01 04 2016
I let the gray kitty stay in last night when I went to bed around 3am. This morning at 6:30 I woke to the sound of two cats yelling at each other in the basement. I got up and saw Mr. Gray at the bottom of the stairs yelling at Spit Kitty. When they saw me, Spit Kitty took off and Mr. Gray stopped yelling. I whistled and called him upstairs to let him outside. As he stood by the door, I reached out to open it and suddenly the gray kitty whirled and bit me on the leg. One bite, 4 holes, no waiting. I figured, why you dirty, no good son of a gun, now your really going outside. I grabbed a broom to herd him out without getting too close, but I couldn’t get the door open, get him headed in the right direction and stay out of his way. He ended up running down to the basement to hide. I decided that I needed to treat the wound and by the time I was done with that, it occurred to me that it was a good thing that the gray cat didn’t go outside. It was definitely in my interest to make sure the cat didn’t have rabies, so I figured I’d keep him in his own room and watch him for the next 10 days. And as a bonus, when the 10 days are up, I’ll take him in for his shots and get him snipped. I even hooked up a security camera in his room so I can keep an eye on him.

So anyway, I got in to see the doctor this afternoon and got the meds to take for the next 7 days. Not that big of a deal really… unless the gray kitty starts showing symptoms.

That’s the strange part. He’s always been a totally nice, laid back kitty. Well, except for when he decided to hang a fang in my leg. He seems just fine with being shut in his room. Of course he’s getting his food delivered, has 2 windows to look out and his own TV. I’m not sure how he’s going to react when I try to put him in a carrier for his trip to the vet.

Oh yea, I decided to name him Ninja, master of the stealth attack.
My leg is healing nicely. I only have 3 more days on antibiotic to go.

01 12 2016
A short update on Ninja. He’s still doing fine and is handling being confined very well. I managed to get a vet appointment for him the morning after his 10 days are up. He’ll get all his shots and get snipped. When all is said and done, he’ll be less likely to get in fights so he’ll have an easier time of it. It will be interesting to see if he still comes around or even wants to stay.

01 15 2016
Well, I managed to get Ninja to the vet this morning. When I tried to put him in the carrier, he went all starfish, with legs spread out in all directions. That clearly wasn’t going to work and I realize that I needed a bigger box. So, with a bigger carrier and a little chase around, he was in the box and we were off to the vet. I’ll pick him up sometime this afternoon.

I ordered them from Amazon and they arrive right in the nick of time. They’re welding gloves and they reach all the way to my elbow. I have no idea if Ninja was biting or scratching because I didn’t feel a thing.

01 18 2016
When I picked up Ninja at the vet’s, the doctor almost gushed about his excellent physical condition, including his teeth. She figured he was 2 or 3 years old. After bringing him home, I kept him in his room for an extra day because it was snowing and cold. The day after that I invited him to go outside if he wanted. It took him all day to get up the courage to go outside, and when he did, he hung around for a short while and even considered coming back in. Finally, he headed off to the east and into the night. Later that night he showed up and came inside to grab a bite to eat, then went right back out. I think he was testing to see if he could come inside and be allowed to go out again. That was last night and I haven’t seen him since, but the weather is nice again and he obviously knows how to live well outside, so I’m not worried. I expect he’ll be back.

01 19 2016
I’m sure you all remember the commercial about cats with thumbs.
Here’s a picture of Ninja’s front paws. 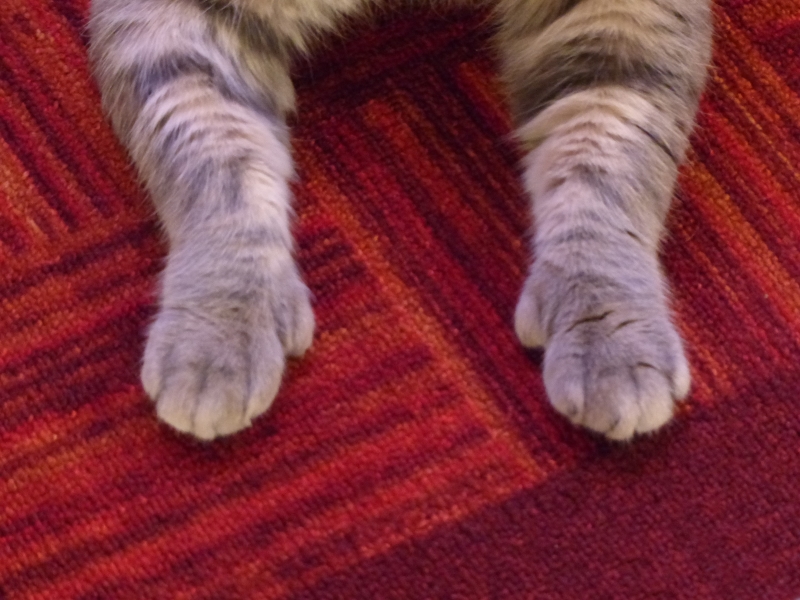 01 25 2016
Ninja, my little leg biter, hasn’t missed a night stopping by for dinner. He comes in and heads straight down to his room and waits to be fed. He’ll stay in for a few hours and then wants outside. I noticed, for the first time tonight, that he’s sleeping in one of the cat houses on the deck.That’s good since it’s been snowing all evening.

02 02 2016
After I let Ninja back outside, he stopped by at least once a night for dinner and a few hours snooze, inside. I figured there was no doubt he was one of the tribe, but now I haven’t seen him for the last 3 nights. I’m worried about him. I suppose he might have found his way back home. I hope that’s the case. Coincidentally, Silkie has started showing up again. Maybe that figures in to it. Luckily our weather is still very mild for this time of year.

02 02 2016
Ninja would always show up right after dark and then any time later the same night. It’s possible that I missed seeing him, but with all the security cameras that I have to keep track of the cats, it’s not likely for 3 nights in a row.

02 02 2016
Good news. I just got home from town and a few minutes later Ninja showed up. He came right in and went downstairs to wait for his dinner. I’m really tickled to see him.

02 19 2016
Ninja comes by about 4 nights a week, some times staying inside for a few hours. All my other cats are doing fine. 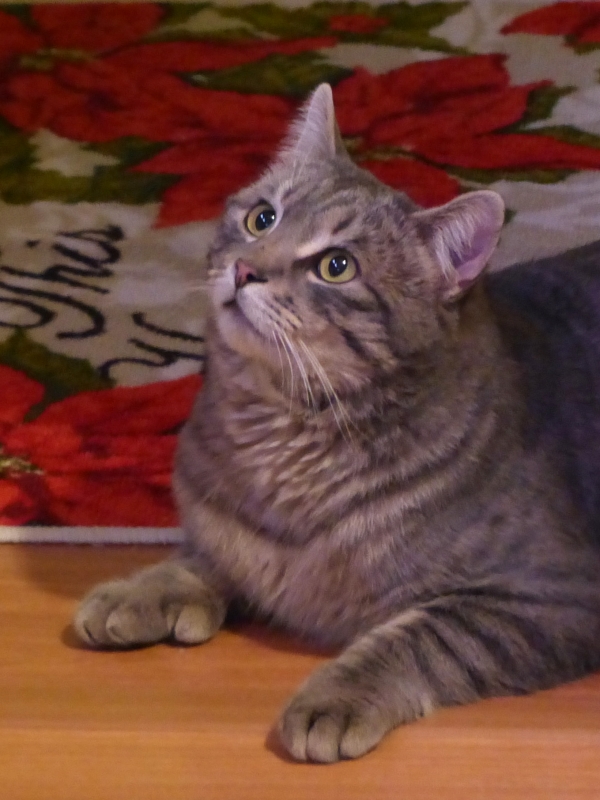