It was just after New Years in 2004. I had seen a big grayish black cat skulking around the edge of my property. I’d never seen him before and he looked like hell. His fur was going every which way and almost seemed to be missing on his back half.

A couple of days after first seeing him, I was coming home from town and I got to the end of the road where I turn into my place. I saw this big cat sitting in the middle of the road just yowling. It was about -15f below zero and the wind was really blowing. I didn’t know where he came from or who he belonged to but he seemed to be in trouble. I parked and walked up to him and he didn’t even move, just kept yowling, so I picked him up and carried him into the house. He did stop yowling when I picked him up. He changed to growling. Anyway, I got him inside and warmed up. Once he filled his tummy, all he wanted to do was sleep. I didn’t know where he belonged but I figured I’d sort it out when the weather got better.

A few days later the girl, who lives to the north of my place, knocks on my door and asks if I’ve seen her cat ‘Little Bit’. Finally after a bit of confusion I decided this had to be her cat so I told her that I had seen him and he was sleeping under my bed.

The story was that she had gone out of town to look for a new job and her house sitter mistakenly let her cat out. He had always been inside up til then. No wonder he wasn’t doing well outside. Oh and the reason he looked so strange. He had a lot of tangles in his fur so she had shaved his back half!

She took ‘Little Bit’ home but the next day she was back over with the story that her new landlord in the new city changed his mind and wouldn’t allow pets now. Of course she wanted me to take her cat. I told her I really had too many cats already. She said please. Finally I gave in and agreed to give ‘Little Bit’ a home.

She called him ‘Little Bit’
I renamed him ‘Big Guy’
You decide which makes more sense. 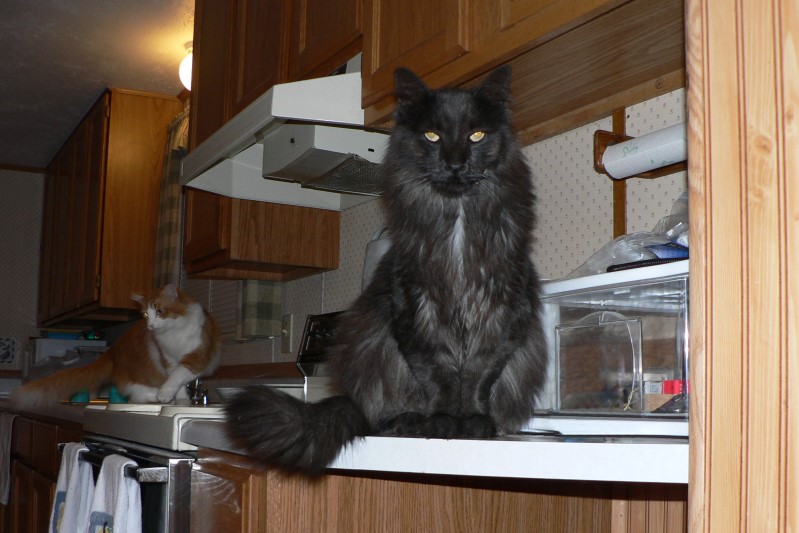 That’s Redhead in the background. That’s another story.